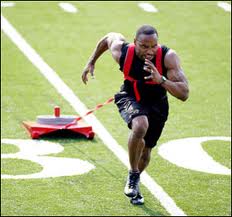 That’s actually good news for coaches, however, because we know exactly what to do with them – short bursts of acceleration.

The scientists seem to have narrrowed things down to two possible mechanisms:

1.  There is a neuromuscular adaptation that takes place.  The resistance essentially teaches the athlete to fire harder on each step, thereby generating more force into the ground.

2.  The resistance teaches better mechanics.  Biomechanical analysis shows that the orientation, or angle, of the ground reaction forces (GRF) applied to the ground is more important than the actual amount of GRF.  Weighted sleds may help teach athletes how to apply force more horizontally (versus vertically), which improves an athlete’s ability to accelerate.

While scientists are not 100% positive which of these mechanisms is at work (it may be a combination), they’re also not sure how to balance the principles of Specificity and Overload which are two of the most important principles in performance training. 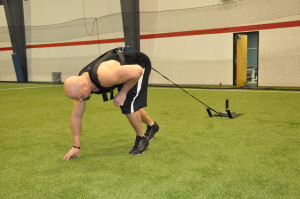 This principle also states that the further away from the actual skill you get, the less your practice will transfer.  So, if you want to improve acceleration speed, running at top speed isn’t going to help very much.  Jogging is going to help even less.

The Overload Principle basically says that you need to systematically increase the amount of stimulation delivered to the body in order to force an adaptation.  This principle is all about attempting to do what you currently are incapable of doing, and gradually making it more difficult.  This is the most basic underpinning of resistance training.  It’s how we get stronger.

Weighted sleds seem to meet us at the crossroads of these two important principles:  Do we overload the neuromuscular system by using more resistance, or do we practice the skill and learn more effective strategies to apply force into the ground?

Well, instead of joining the debate and picking sides, why not get the best of both worlds and take advantage of everything a sled has to offer?

For several years, I’ve been combining light sled work (15-20% of bodyweight) with heavier sled work (40-50% bodyweight) to get the best results possible.  I use these two methods in conjunction with Contrast Training (practicing the skill without resistance after practicing WITH resistance) to produce optimal results in an athlete’s ability to accelerate.

These methods jive perfectly with my overall philosophy of speed development, and I’ve been able to regularly cut 1-2 tenths of a second of a 10-yard dash, sometimes even more depending on the athlete.

I’ll typically concentrate on one method at a time, but I often combine them as well.  I will do 4-5 reps of light work, followed by 2-3 reps of unweighted practice before repeating that process with the heavier sleds.

This is basically my way of utilizing science in a practical setting as a coach.

Check out the short video below to learn a little more about this process:

One Response to Heavy vs Light Weighted Sleds