One of the most exciting coaching experiences I had this winter was helping University of Michigan WR Devin Funchess improve his 40-yard dash time after a sub-par performance at the Combine. U of M hires me to train their graduating seniors for the Combine and NFL Pro Days, but Devin spent a couple of months training down south instead of staying in Ann Arbor. When he posted a pedestrian 4.7 on the 40, it was obvious that something was wrong.

I saw an opportunity to use my coaching skills to make a big impact.

As soon as he returned to Ann Arbor, I started working with him to prepare for his Pro Day just a couple of weeks away. I began by simply watching what he was doing, and his lack of confidence was obvious. He was thinking about it WAY too much and appeared mechanical. It wasn’t working for him. 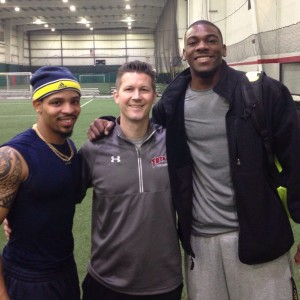 We talked for a while, and I got him to clear his mind of all that extra stuff and focus on just a couple of simple cues. I wanted to loosen him up, and get him back to being an athlete instead of a robot. Within an hour, he was accelerating with long, powerful strides, covering a massive amount of ground on each step.

I explained a simple formula to him. In order to run faster you need to put a tremendous amount of force into the ground, in the right direction, in a very short period of time.

He was already able to produce a ton of force (the kid is a freak) and he could do it with a ton of power (very short time). All we needed to do was help him apply it into the ground in the right direction. Mechanics without being mechanical.

He bought in right away, and it worked.

A couple of weeks later, he posted a 4.48 at his NFL Pro Day, and we were both ecstatic.

The Detroit Free Press even wrote an article about it – http://www.freep.com/story/sports/college/university-michigan/wolverines/2015/03/17/devin-funchess-40-nfl-draft/24898229/

I’m not telling you this story to brag. I’m telling you because it illustrates the power of coaching and mechanics.

Teaching athletes how to apply force into the ground (which is mechanics) can make a tremendous difference in the way they move. And, helping an athlete clear his head and get out of his own way can make an even bigger impact.

We all have the opportunity to help athletes achieve massive success like this. We just need to recognize when our skills are needed the most and figure out how to approach an athlete in a way that will make the biggest impact.

That’s why I love to teach coaches about strength and speed development. My hope is that each one of those coaches will make an impact on several athletes, and the ripple effect will be enormous.

I will continue to provide you with information about strength and speed, but sometimes we need to take a step back and recognize what a difference we can make. The fact that you’re reading this means you’re one of the coaches who make a difference, and I’d love to hear some of your stories. Leave a comment below or e-mail me sometime to let me know how your training is making a difference. Maybe I’ll share some of the stories. I look forward to hearing from you.

2 Responses to Making an impact through….40 times?