By Jim Kielbaso on October 23, 2011 in Strength & Conditioning

The concussion problem in sports has reached epidemic proportions.  The NFL is spending millions on awareness and just instituted new practice rules to reduce the number of blows the players are exposed to during practices.  Several high school athletic associations are also implementing new rules to deal with the issue.  So far, everything has focused on how to deal with the athlete after the concussion, but there is now a movement to help educate athletes, parents and coaches about sports concussions and what can be done to prevent or avoid them.  We’ll never be able to eliminate concussions from sports, but there are certainly things we can do to help reduce the forces our brain encounters.

There are really four basic components of neck injury and concussion prevention:

1.  Protective equipment – In most sports, this means properly fit, quality helmets and mouth pieces.  Unfortunately, no equipment or training currently known to us will eliminate concussions.  “The best helmet on the market can still lead to injuries of the head including concussions,” said Scott Peck, a certified athletic trainer in Washington state.  “To decrease concussions, athletes need to practice good technique in tackling and blocking by keeping their heads away from contact.”

2.  Technique – Some sports include more contact than others.  Good coaches always teach athletes not to initiate contact with the head, but we still see a lot of young athletes using poor form when tackling or hitting.

3.  Awareness – It seems crazy, but there are still a lot of coaches, parents and coaches who simply do not understand how dangerous a concussion can be or that there is inherent risk involved in participating in most sports.  This site was set up to help heighten awareness at the same time we discuss prevention options and proper treatment.

4.  Neck Training or Neck Strengthening – This component is just now picking up momentum, but some coaches have known about this concept for years.  This is 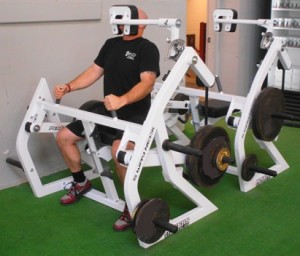 First, most people don’t know how to safely and effectively train the head and neck musculature.  Second, it would be next to impossible to produce scientific evidence to show that training will help prevent concussions because you would have to use real human beings and expose them to potentially life-threatening blows.  This would never pass any collegiate ethics committee, so the research probably cannot be done.

Still, the automotive industry has known for years that a stronger and stiffer neck significantly reduces the G-forces encountered by crash test dummies in crash research.  It seems obvious that a stronger neck would be extremely helpful during a blow to the head, but most doctors aren’t yet ready to admit that.  That could be because:

a.  Doctors won’t make any money from the prevention side of this issue.

b.  Doctors probably have no idea how to train.

c.  Doctors typically refer to the scientific literature, but we already established that this evidence will probably never be published in any scientific journal.

We have to understand that no amount of training or equipment will eliminate all injuries, but that is not the point.  Ten years ago, ACL prevention programs were virtually non-existent.  Today, female athletes all over the country understand that proper training will limit their risk of sustaining an injury.  Yet, ACL injury rates haven’t slowed down.  It doesn’t mean that the training has not helped.  And, going through a training program does not mean you will never hurt yourself.  Training is meant to reduce risk or severity of an injury.

The same goes for properly training the neck & head to reduce the risk of concussions and serious neck injuries.  The training does not eliminate the injuries, but it can help to lessen the risk or severity of neck and head injuries.

The leading researcher on neck training, Ph.D. candidate Ralph Cornwell, put it best when he said “If we know that it might help, and it’s not going to hurt, why wouldn’t you want to do this kind of training?  People do ACL prevention programs all the time.  This is like an ACL prevention program for your brain and neck.  You can replace your ACL, but as far as I know, you only have one brain.  It just makes sense to protect it.”

Research done by the NFL is now revealing that the repetitive sub-concussive blows – the hits that don’t knock you out, but just ring your bell a little – are the main culprit behind the long-term brain damage seen in many former athletes.  Many of these athletes are now suing major sports organizations because they are mentally and physically disabled due to these blows.  It seems that every brain has a certain number of hits it can take before long-term damage sets in.  The more G-forces the brain encounter, the worse it gets.

Training can reduce the G-forces encountered on these sub-concussive blows, raising the bar on the number of hits it will take before the long-term damage sets in.  This is some of the best news ever presented on this topic, because it gives us hope that we may be able to combat this problem.

Major sports organizations like USA Hockey and the NFL are recognizing that something must be done, so rules are changing quickly.  Even Dr. Robert Cantu, who is considered one of the leading experts on the subject, has said that he thinks young athletes should wait until they are stronger and more mature before they engaging in intense contact/hitting sports.  This means that the leading authority on concussions understands that being stronger will have a positive affect and is part of the concussion prevention equation.

With the knowledge that training can help prevent injuries and, when done properly, can cause no harm, why would we NOT strengthen the muscles surrounding the head and neck?  We will continue to bring you information on safe training and concussion prevention.