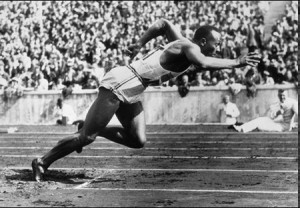 I recently watched the video below of journalist David Epstein’s TED Talk about athletic evolution, and I have to admit that it really made me wonder if our profession is on the right track.  In his talk, Epstein presents all sorts of information about different sports performances and compares old records to more modern performances.

For example, he compared Jesse Owens’ 10.2 100 meter sprint record from the 1936 Olympics to Usain Bolt’s Olympic record of 9.69 in 2012.  Rather than simply look at the time difference, Epstein points out that the track surface technology advancements have accounted for a lot of improvements, not just superior athletes and training.

I guess you need to take a few minutes to watch the video:

Most of us in the sports performance business assume that we’re making a huge difference in the sports world, but this video kind of took the wind out of my sails.

As I thought more about it, though, I believe that this is only part of the picture.  While I can’t argue with most of what he presented, I think that training advances have had an impact on many other areas and in different ways.

First of all, dropping a tenth of a second from a 40-yard dash or 100-meter sprint is no small feat. 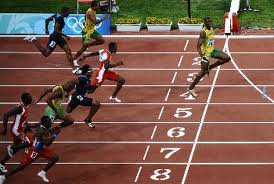 It actually took Carl Lewis a full decade to drop a tenth of a second from his 100-meter time.  Maybe the world records are less than a full second different, but I’m sure everyone remembers what it looked like in 2008 when Usain Bolt won the 100-meters by about two tenths of a second.  It was crazy, and you can see what I mean in this photo of the finish.  If Jesse Owens were in that picture….well….he wouldn’t have even been in the frame.  That’s a pretty big difference.

When I train guys for the NFL Combine, dropping a tenth of a second from a 40-yard dash can make a HUGE difference in his career opportunities.  It sounds like a small difference, but two tenths of a second is actually about 2-3 feet on a 40-yard dash.  If an NFL receiver is 2-3 feet ahead of a defensive back, he’s basically wide open.  I’m not saying that playing football is all about running a great 40.  The point is that small differences in speed make a big difference on the field.

I don’t know if we’ll ever be able to see the data, but I’m willing to bet that the average college (or high school for that matter) athlete is stronger, faster and more powerful than their counterparts from the 1950’s when training was frowned upon.  I think a lot of that has to do with training.

I haven’t crunched all the data, but I did an informal analysis of NFL Combine data comparing the performances from 1999 to 2014.  In 1999, combine training was just starting to get going, whereas today every player with a combine invite get first class training.  I wish I could have found data from the 80’s, because that’s where I think we’d see a much bigger difference.  But, just examining the differences between 1999 and 2014 was kind of interesting.

So, are we training athletes to develop more lower body power than we used to?  It would seem that way.  It would also seem that our training methods are producing strong and faster athletes. 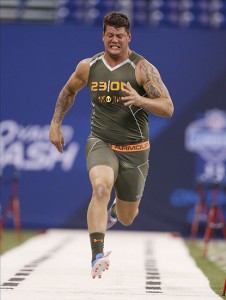 Probably the most interesting thing I noticed from all of this data is that in 1999, not a single guy who weighed over 300 lbs was able to run a sub-5.0 40-yard dash.  This year, 8 guys over 300 lbs managed to break 5.0, and you can see in the photo that Taylor Lewan looks amazingly athletic, unlike some of the big guys of the past.  I think that’s a huge difference.  While you can argue that the 40 doesn’t matter for guys this size, that’s not the point.  The point is that our big guys are moving faster than ever, and this data makes that pretty clear.

I wish it were easy to find this kind of data on high school and college athletes in all sports because I think we’d see a very positive trend toward bigger, faster and stronger athletes today than we had in the past.

Sport coaching advancements have also played a huge role in the increase of athletic performance in many sports.  The average U-14 travel soccer player today would school their counterparts from 30 years ago.  I see 10 year old kids doing things on a soccer field that many high school athletes weren’t doing in the 80’s, and I think the same could be said for many other team sports.

So, while David Epstein’s TED Talk was thorough, accurate, interesting and momentarily made me question the entire profession of sports performance or strength & conditioning, a deeper analysis made me feel better.  After looking at the entire picture, there is absolutely no doubt in my mind that improved training methods are making a positive impact on the athletes we train.  We’re not necessarily shattering every world record in the book, but the level of youth athletics has improved dramatically, and our training methods have a lot to do with that.  I’m confident we’re on the right path.